The Most Widespread Disorders in Elderly People in USA and Canada

As you get older, your body is likely to become more susceptible to various diseases and health problems. Fortunately, it is possible to prevent or inhibit some of them if you know what to expect and how to deal with the natural changes occuring in your body as you age. In this article we have rounded up the most common health issues in senior patients so that you can make sure you are doing your best to protect your health in the long run.

Cardiovascular problems are one of the most widespread causes of death in people who are 65 and older. It is estimated that almost two fifths of men and one quarter of women aged over 65 suffer from chronic heart disorders. Combined with other risk factors, such as high levels of cholesterol or hypertension, these chronic conditions may increase your chances of developing other cardiovascular disorders or having a stroke. To avoid that, healthcare experts recommend eating a well-balanced diet which would allow you to maintain a normal weight. Exercising regularly and making sure you get enough sleep every night are also great ways to prevent cardiovascular problems as you age.

Neurological disorders in elderly patients are quite a common phenomenon, and Alzheimer’s disease keeps claiming lives of thousands of people aged 65 and older every year. According to data gathered by the Alzheimer’s Association, at least 11% of all senior population suffer from Alzheimer’s disease. However, even this alarming estimate could turn out to be quite moderate because Alzheimer’s disease is rather difficult to diagnose. Alzheimer’s has a powerful detrimental impact on mental health in people who suffer it, resulting in permanent impairment of numerous cognitive functions and complicating the patients’ daily lives. Alzheimer’s patients typically require assistance when it comes to self-care whether they keep living at home or move to a special facility.

Many healthcare professionals believe that arthritis is the most common disorders in elderly patients. Statistic data on arthritis patients show that at least one half of the older-than-65 population in any developed country suffer from one or multiple forms of arthritis. Depending on the type of arthritis, it can cause various problems ranging from mild discomfort to overall lower quality of life. Whether you are already affected by arthritis or just looking for ways of preventing the disease, it is crucial that you stay active. In some patients, the pain and discomfort caused by arthritis can get quite intense and make exercising seem impossible or undesired. Nevertheless, it is still important to engage in physical activity on a regular basis even if arthritis is set on inhibiting your fitness and workout attempts. You can talk to your healthcare provider about this issue so that you can develop a personalized fitness plan that fits your exact needs with the help of a healthcare professional.

Cancer remains one of the leading causes of death in most countries around the world, US and Canada being no exception. It is estimated to affect around one quarter of seniors regardless of their gender. Fortunately, modern medicine has found numerous ways of treating cancer, and if diagnosed early enough, most forms of cancer can be treated quite successfully. Healthcare professionals do not seem to agree on a single strategy that would allow people to minimize their chances of developing cancer, but leading a healthy lifestyle and avoiding too much stress seem to be a good idea anyway. As a senior cancer patient, there is a number of ways in which you can improve your quality of life, including joining patient support groups, taking as much input from your medical team as possible, and maintaining healthy habits.

Bones are the structure of our bodies, so it comes as no surprise that weaker bones could lead to a significant decrease in one’s quality of life. Osteoporosis is estimated to affect over 50 million of senior Americans, and the current trends point out that this number could rise to 65 million by as soon as 2020. Suffering from osteoporosis inevitably makes people less active and mobile because they are afraid of falling or damaging the bones otherwise. Suffering a bone fracture or break at an older age generally leads to worse outcomes as compared to younger patients, so it is important that you keep track of your bone health and undertake respective measures if needed.

Catching a flu or even having pneumonia may not seem like too much of a problem at a younger age, but once you approach 60, even these mild disorders can lead to some serious consequences. According to the CDC, flu and pneumonia are even in the top ten causes of death for seniors, so these conditions are not to be taken lightly in elderly patients. Not only are they more susceptible to influenza and pneumonia, but it also takes longer for them to fight off the viruses and infections and fully recover. It is advisable that you get a flu shot every year, and depending on your healthcare provider’s recommendations, it might be a good idea to get the pneumonia vaccine. These measures will not make you invincible to the infections, but they will minimize your risk of suffering from their long-term and potentially life-threatening complications.

This is another health issue that may seem like a minor problem when you are in your thirties or forties, but with age, falls come with an increasingly high chance of having to visit the emergency room. What is more, according to statistic data, a senior patient who has had to get treatment in an emergency department once is more likely (up to 35%) to come there again within the following 12 months. Every year, more seniors than any other age group (and that is including children) have to get medical help for the consequences of a fall at an emergency room. According to a study published in 2013, the most common place where senior falls occur is home. Tripping over rugs and slipping on wet floors are the most widespread causes of falls, so try to exercise extra caution when being in areas with these objects. 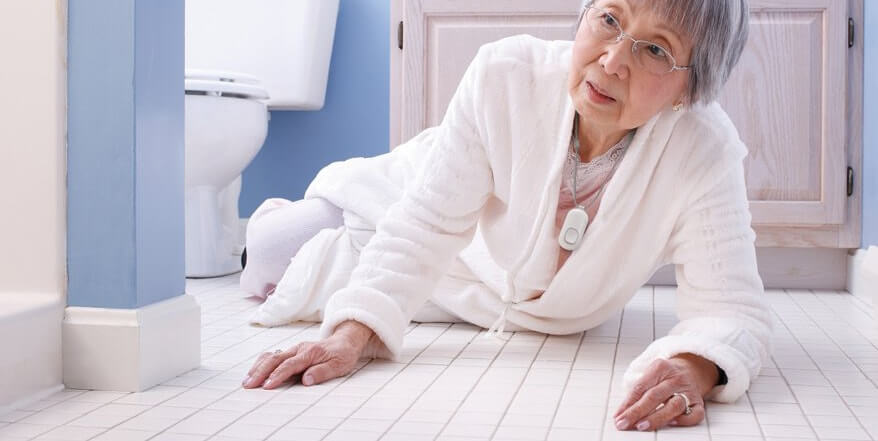 Chronic respiratory disorders in elderly people are in the top three leading causes of death among seniors. Researchers estimate that at least one person aged over 65 in ten lives with asthma, and another 10% of the senior population suffer from either emphysema or chronic bronchitis. Having a chronic respiratory disease may not be life-threatening in itself, but it is likely to expose you to a higher risk of having pneumonia or other respiratory infections. If you choose to do lung tests on a regular basis, you will provide your healthcare provider with enough information to diagnose possible respiratory problems early on and prevent them from lowering your quality of life.

Healthcare professionals estimate that at least one quarter of all senior population in America suffer from diabetes, a potentially life-threatening condition in elderly patients. The good news is that diabetes is relatively easy to identify and diagnose - in most cases, simple blood tests done at regular intervals of time will suffice. If you have been diagnosed with diabetes or identified as someone at risk for diabetes, you can start making respective changes to your lifestyle and diet immediately, and this is often enough to significantly slow down the progression of this disorder.

According to official statistics, as many as one-fifth of all American seniors have experienced at least one episode of depression. The impact of depression on senior health is not always easy to define, but medical practitioners know for sure that depression impairs the body’s ability to fend off infections and viruses, making it more vulnerable for potential attackers. In addition, depression could make seniors reluctant to socialize and lead an active lifestyle, which is likely to have negative outcomes for general health.

Using pharmaceuticals and therapy to address depression are valid ways of dealing with one of the most common mental disorders in elderly patients, but simple measures such as becoming more physically and socially active could go a long way, too. According to numerous studies and reports, only around 40% of all senior population in the US get enough exercise regularly. What is more, an average senior only spends one-tenth of his or her waking hours communicating with family or friends. Feeling less lonely and becoming more active are great ways of addressing and preventing depression in elderly patients.

Related: When Does Depression Lead to Impotence?

While having perfectly healthy teeth and gums when aged over 65 might seem like a long shot, taking good care of teeth and gums is particularly important at older age. Over a quarter of all senior Americans are estimated to have no natural teeth, and that number could surely be reduced by keeping proper oral hygiene. As you age, your mouth gets dryer and cavities find their way to your teeth easier, so it is particularly important to have regular check-ups at the dentist’s office, brush and floss your teeth as a senior.

According to the findings of several major studies, around 20% of all people aged over 65 have had problems with substance abuse at least once at some point in their lives. The study participants mostly named alcohol or tobacco as the substance they abused, but pharmaceuticals can also be used by seniors for intoxication purposes. Apart from the overall negative impact on the abuser’s health, these substances can have potentially dangerous interactions with prescription medications and promote some senior health risks, such as falls.

As it turns out, having had chickenpox as a child does not necessarily shield you from the disease as you grow older. Chickenpox can make a comeback in the form of shingles - a condition that will cause one side of your body to hurt, tingle, develop an itchy rash, and blister. The chances of having shingles for a person aged over 60 are around 35%, and it is estimated that one half of the senior population will experience shingles before they are 80. A shingles vaccine is available, so it might be a good idea for your to get vaccinated as a preventive measure.

Obviously, poverty itself is not a disease, but it can facilitate the onset of other diseases and health issues because of lacking access to healthcare. Almost 50% of all Americans aged over 65 live below poverty level, with women having a higher chance of experiencing poverty than men. Single elderly people are more likely to live below poverty level than those who live in couples, which is due to the ability to access less resources alone.

Last but not least, this list would not have been complete without mentioning obesity. Being obese as an older adult increases your chances of suffering from such chronic and life-threatening conditions as cardiovascular disease, cancer, and diabetes. Obesity is defined as having the body mass index that is equal to or greater than 30. Around 40% of people aged between 65 and 75 are estimated to be obese, which is an indicator of insufficient mobility and leads to negative health outcomes.

Now that you are aware of the most common elderly disorders and diseases, you can start taking action towards minimizing your risk of suffering from them. While the exact steps towards minimal health risks vary from individual to individual, adopting healthier lifestyle choices and habits, as well as paying a visit to your healthcare provider to discuss your general health and outlook are great ways to get you started.