Scabies Sum-Up: Recognize Symptoms And Learn About The Causes And Treatments

Scabies, also known as “the seven-year-itch,” is a skin condition caused by the type of skin mites generally referred to as Sarcoptes scabiei. The agents of scabies can live on the skin’s surface for a period up to a couple of months. After that, the mites lay their eggs under the skin’s surface. Itchiness and pimple-like rash are the most common symptoms of scabies. Scabies is a very contagious disease transmitted as a result of direct skin contact, as well as through clothes or bedding items. People can often be infected during sexual contact. Therefore, scabies can be classified as a sexually transmitted disease. It’s very unlikely that you will get scabies through handshakes or hugs. However, the probability of getting scabies becomes higher in certain circumstances. The risk of transmission is increased in crowded living conditions, as well as in places with a poor water supply. 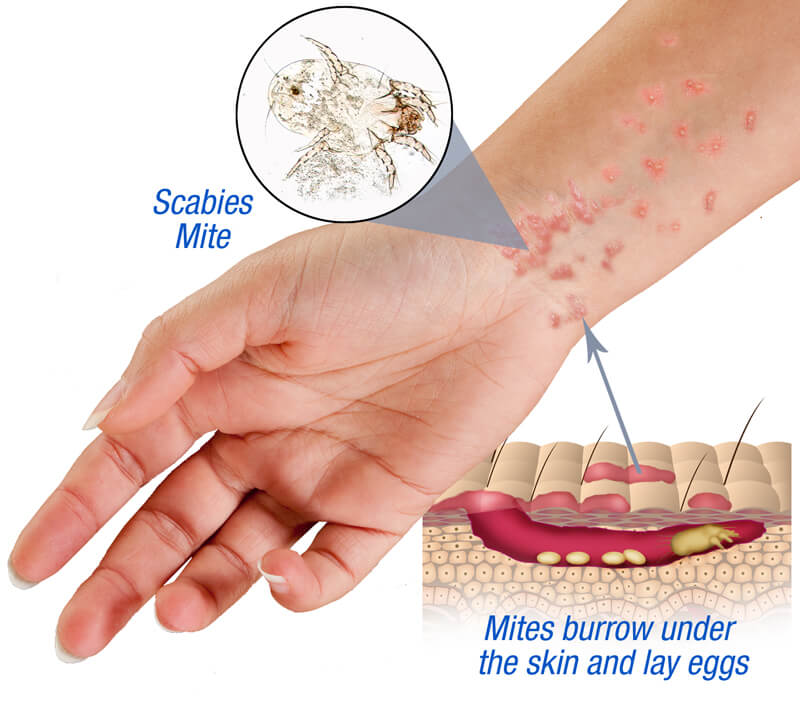 The symptoms of this condition can appear several weeks after the person has been infected with mites. They are caused by an allergic response to the mites. If a person has already had this infection before, the symptoms can develop very quickly, so it might take only a day for them to become visible. Specific symptoms of scabies include itching and rash. Small red burrows can also be seen on the skin’s surface. These symptoms can become more intense in the night-time or after a hot shower. Mites can live under the skin surface throughout the whole body or just in certain areas. Scratching makes it worse and may generate sores that can get infected. In this case, some antibiotics for skin treatment should be prescribed.

The following areas are the most vulnerable to scabies in babies and toddlers: face, head, neck, feet, and hands. When it comes to older children and adults, scabies will most likely affect the following areas: wrists, elbows, nipples, genitals, armpits, waist, area between the fingers, and buttocks. As a rule, scabies will occur on the face or scalp only in babies or people with a poor immune system.

Crusted scabies is a more severe form of this skin condition that generally occurs in people with a weakened immune system. In this case, symptoms tend to be more intense, and a person can be infected with millions of mites.

How are Scabies Diagnosed?

You should see your doctor if you suspect that you are infected. Scabies are, as a rule, easily diagnosed by means of the physical examination of an infected skin area. Sometimes, in order to confirm the diagnosis, your doctor may use a special needle to remove a mite from the skin. If it is impossible to actually find a mite, the doctor will opt to get a skin sample by scraping off the small skin area. To confirm the diagnosis, the skin sample is examined under a microscope.

What is the Medical Treatment for Scabies? Buy Elimite and more

Generally, medical treatment for scabies includes creams, lotions, and ointments to be applied directly to infected areas. As a rule, such medications are applied before bedtime, since mites tend to be active at night. It is quite possible that your doctor will instruct you to apply the anti-scabies treatment all over your body. The next morning, you will have to rinse off the medicine, and repeatedly apply it for the night. For a successful treatment, you should apply the medicine exactly as prescribed.

The following medicines are most commonly prescribed for scabies treatment:

A person infected with scabies may also be instructed to use some additional remedies that will help soothe the symptoms of scabies, including the following:

In cases of crusted scabies, or if the infection has spread all over the body, or if the initial treatment did not lead to any improvement, the doctor may prescribe additional medical treatment, such as oral pills. Some patients may feel that their symptoms become more intense during the first week of treatment. However, by the end of the first week, treatment should give visible results, since there will be less itching. As a rule, by the end of the fourth week of treatment, most patients will fully recover.

You should avoid any sexual contact until you have fully recovered from scabies. Don’t hesitate to tell your sexual partners about infection, and advise them to see the doctor: they should be treated as well if they have been infected. To prevent repeated infection by scabies, all family members should be examined and treated, if needed. Since mites that fall off the body can live up to 72 hours, all clothing, bedding, pillows and towels used by infected persons should be washed in hot water and hot-dried. Any items that cannot be washed and hot-dried should be carefully vacuumed. After that, you should get rid of the vacuum bag and wash the vacuum cleaner with hot water and some bleach.

How You Can Protect Yourself from Scabies

In order to prevent the infection, you shouldn’t share your clothes or bedding with persons who might be infected with mites. It is commonly known that scabies can be transmitted during the sexual contact. Therefore, you shouldn’t have sex with partners who are infected with scabies. You should be aware that condoms won’t work in protecting you against scabies.

Scabies is one of the most widespread skin conditions, both in children and adults. People of all ages, races, and social classes can be infected with mites. The causes of scabies epidemics are considered to be complex, including socioeconomic (poverty, early sexual activity, unhygienic living conditions, migration, etc.), medical (prolonged incubation, late diagnosis, and treatment, abnormal forms of scabies), and immunologic (decrease in immune response to Sarcoptes scabiei).