Pelvic inflammatory disease (PID) is a condition caused by an infection of the reproductive organs in women. The pelvis is located in the lower abdomen, and includes the ovaries, the fallopian tubes, the uterus, and the cervix. Several types of bacteria can be the cause of PID, including bacteria that causes sexually transmitted infections (STIs) such as chlamydia and gonorrhea. What usually happens is the bacteria first enters the vagina and causes an infection. After some time, the infection moves on to the pelvic organs. 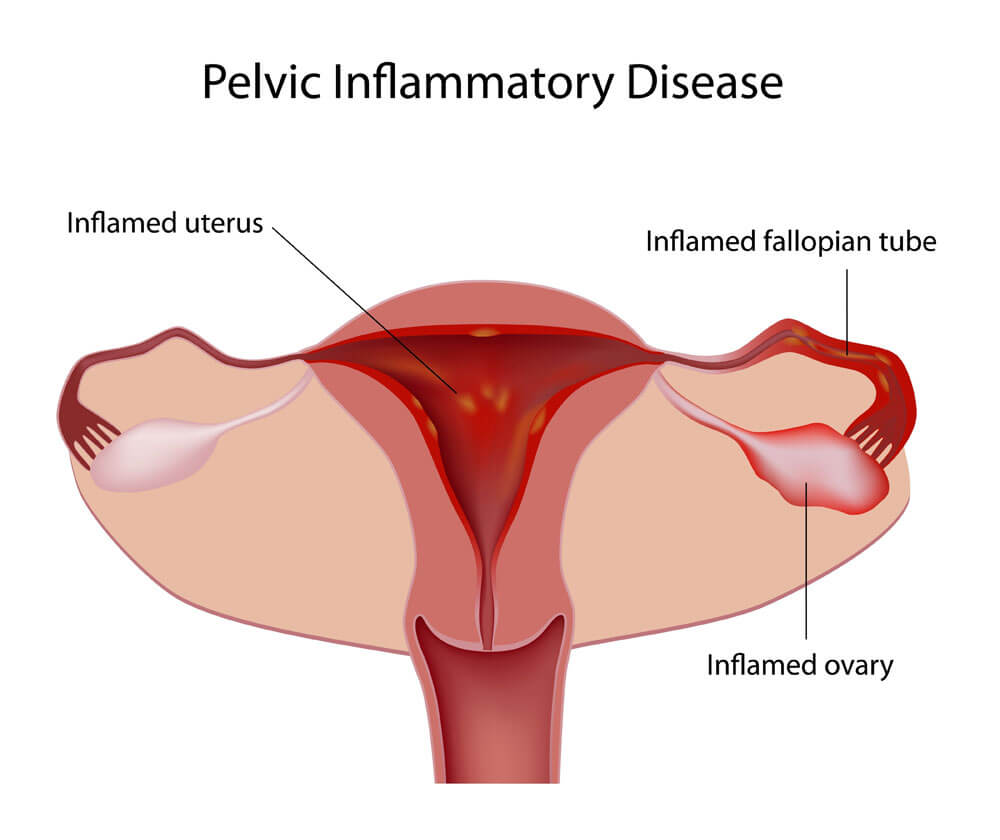 PID can have extremely severe, even life-threatening repercussions if the infection spreads to the blood. If you have a suspicion that you may be infected, make sure to contact your doctor right away.

The risk of contracting pelvic inflammatory disease increases if you already have chlamydia or gonorrhea. In any case, you can still develop PID without ever having any STI.

Other risk factors known for contributing to the occurrence of pelvic inflammatory disease are:

In some cases, women with pelvic inflammatory disease don’t experience any symptoms. However, the women who have symptoms can experience the following:

Pelvic inflammatory disease usually causes mild or moderate pain (if any). However, some women report severe pain, and other symptoms, including:

If you experience such severe symptoms, call your doctor right away or go to the nearest emergency room, as the infection could have already spread to your blood or other parts of the body at this point. Again, be aware that this can be a life-threatening situation.

Your doctor may diagnose PID after he hears about your symptoms, but in most cases, the doctor will  run special tests to establish the diagnosis.

These tests usually include:

After collecting these samples, the doctor will send the samples to a laboratory for analysis.

If the doctor comes to the conclusion that you have pelvic inflammatory disease, he may run more tests and determine if your pelvic area has been harmed. PID can cause scarring on the fallopian tubes and permanent damage to the reproductive organs.

Additional tests may include:

Doctor will likely advice you to take antibiotics to treat this disease. Since a doctor may not know the exact type of bacteria that caused the infection, he may give you two different types of antibiotic drugs to treat a wider range of bacteria.

In just a few days after starting treatment, the symptoms will usually improve or disappear altogether. However, you should finish your treatment course, even if you feel better after a day or two. Dropping the medication course early can cause the the infection to return.

If you are sick, pregnant, or unable to swallow pills, have an abscess (a pocket of pus of an infectious origin) in the pelvis, the doctor wil likely send you to a hospital for professional treatment.

Pelvic inflammatory disease may sometimes require surgery. This is, however, a rare circumstance and is  only necessary if an abscess in your pelvis ruptures, or if your doctor fears there is a significant possibility of this occurring. It can also be a crucialcourse of action if the infection doesn't respond to prescription treatment.

The bacteria responsible for PID can also spread through sexual contact. If you are a sexually active person suffering from this condition, your partner is highly advised to also get treated for PID. Men can be carriers of bacteria that causes pelvic inflammatory disease in women. This infection can resurface if your partner does not receive treatment. You may also be asked to avoid sexual intercourse until the time the infection has been fully eradicated.

You can decrease the risk of getting PID by:

Visit a doctor if you suspect that you could have PID. Certain other conditions, such as urinary tract infection can have similar symptoms and thus make you feel like you have PID. Visit your doctor and he/she should be able to make an accurate conclusion by running a test for PID and ruling out other conditions.

If you don’t get treated for PID, the symptoms are likely to worsen and lead to serious health issues, such as:

This infection can also spread to other parts of the body. If it spreads to the blood, it can be life-threatening.

The Long-term Outlook for PID

Pelvic inflammatory disease is actually an easily treatable condition, so most women reach a full recovery if they get proper care. However, roughly 10 to 15 percent of women with PID experience difficulty getting pregnant. Furthermore, about 9 percent of women have ectopic pregnancies, and about 18 percent of women experience chronic pelvic pain as a direct result of PID.