Otitis is an inflammation of the ear. The disease can be chronic or acute, purulent or catarrhal. The severity of the pathological process depends entirely on the virulence of microorganisms. The state of the immune system also plays a great role.

According to statistics, 30% of all ENT diseases are an acute form of otitis media. Children of preschool age get sick much more often than adults. By the age of three, 80% of children have suffered from otitis media.

Specialists at Canada HealthCare Mall have prepared this article on otitis where you will find detailed information about the disease.

Otitis can be caused by the following bacteria:

Any ear inflammation is extremely dangerous and thus you need to see a doctor as soon as you notice you have any symptoms of the disease.

Symptoms of otitis include:

After the appearance of pus, the patient’s condition usually improves, the fever goes down, and the pain becomes less pronounced or completely disappears. 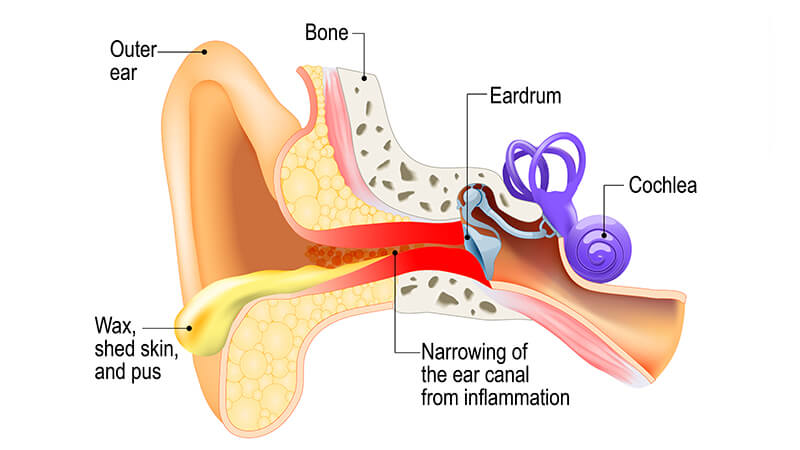 With the unfavorable development of the disease, pus cannot find a way out. This is fraught with the fact that the infection can begin to spread inside the skull. Such otitis can turn into meningitis, as well as into the abscess of the brain. Professionals at Canada HealthCare Mall recommend consulting an otolaryngologist for advice and proper treatment as soon as possible to avoid terrible consequences.

Depending on the localization of inflammation, otitis can be:

Swimmers often suffer from otitis externa. The inflammation begins because of a mechanical trauma to the auricle or an external auditory canal. Damage to the protective cover leads to the ingression and multiplication of pathogenic microorganisms. Then a furuncle is formed at this place.

If you don’t immediately get the appropriate treatment, otitis externa turns into a severe form and spreads to the parotid cartilages and bones. With otitis externa, patients usually experience throbbing pain, puffiness of the ear, and a moderate increase in temperature.

With otitis media, the inflammatory process extends to the airway cavities of the middle ear located immediately behind the eardrum – the tympanum, auditory tube, and mastoid process. The form of otitis media often turns from the catarrhal into purulent.

Acute catarrhal otitis media happens as a complication of acute respiratory disease or acute respiratory viral infection, after penetration of the pathogen of infection into the tympanum. At the initial stage, the level of hearing may decrease and tinnitus may appear, while the temperature of the body remains normal or slightly goes up.

If these symptoms are ignored, then catarrhal otitis is accompanied with high fever and pain in the ear, extending to the eye, neck, throat, or teeth. Such an otitis can be treated only having got rid of an infection, for what it is necessary to contact the doctor urgently.

Acute purulent otitis media is a neglected catarrhal form. The disease is manifested by the breakthrough of the tympanic membrane and the outflow of pus, followed by a decrease in body temperature. Treatment, in addition to fighting infection, should include permanent removal of pus from the ear, which can only be done by ENT doctor.

In addition, pus cannot always go out by itself. If the eardrum is very strong, surgery is required to puncture the tympanic membrane. This procedure is called paracentesis and is performed using a local anesthetic drug.

After the pus is removed, the eardrum is cicatrized, and the quality of the hearing is not further reduced.

If acute otitis media is not treated, the pus spreads inside the skull. As a result, internal otitis develops. It affects the vestibular apparatus, which causes an abscess of the brain and leads, at least, to a partial or total loss of hearing. Therefore, when the first signs of otitis appear, you should not resort to any self-treatment. See a doctor as soon as possible.

Each ENT disease is accompanied by increased mucus production. As its amount increases, mucus enters the Eustachian tube, disrupting the ventilation of the tympanum. The cells of the tympanic cavity release an inflammatory fluid. In addition to clogging the lumen of the Eustachian tube, pathogenic microorganisms, which normally form part of the local microflora, also contribute to the aggravation of inflammation.

The causes of otitis are as follows:

A simple examination of the auricle and auditory canal with the help of a head mirror or an otoscope is sufficient to diagnose otitis.

How Is Otitis Externa Diagnosed?

How Is Otitis Media Diagnosed?

Acute otitis media is also diagnosed during an external examination. The doctor is guided by some characteristic signs of this disease – a reddened eardrum, a restriction of its mobility, and the presence of perforation

The testing of hearing on a special apparatus (audiometry), as well as measurement of pressure inside the ear with the tympanometry, is used to clarify the diagnosis of chronic otitis.

If the acuity of hearing with otitis media sharply decreases and attacks of dizziness begin, a patient may suffer from otitis interna (inflammation of the ear labyrinth). In this case, doctors use audiometry.

X-ray is used to check if there are any complications – severe intracranial infections or mastoiditis. These are quite rare cases, but if there are suspicions of these dangerous complications, CT of the brain and temporal bones of the skull is also needed.

How to Treat Otitis

The method of treatment is determined by the otolaryngologist after having established a type of otitis and its severity.

With a timely visit to the otolaryngologist and the exact observance of all prescriptions, otitis passes quickly enough without leaving any consequences.

How to Treat Otitis with Potentially Natural Methods

In addition to drug therapy, there are many ways of alternative treatment of otitis. Experts from Canada HealthCare Mall emphasize that such methods are acceptable for use but are mostly of an auxiliary nature. However, remember that you can use natural methods only after consulting a doctor and in no case resort to self-treatment to avoid complications and irreversible consequences.

Depending on the form and severity of the disease, the following natural methods of treatment can be used:

The main goal of preventing otitis in adults is to prevent the Eustachian tube from being blocked by thick mucus. As a rule, acute rhinitis is accompanied by liquid secretions but during treatment mucus often becomes thicker, stagnating in the nasopharynx.

In order to prevent the development of otitis caused by congestive purulent processes, it is necessary to treat the corresponding ENT diseases in a timely manner.

Things to do to prevent otitis as a result of ENT diseases:

Specialists at Canada HealthCare Mall ensure that the most important prevention measure is a timely visit to the doctor. He or she will examine the tympanic membrane and determine the type of otitis. You may be required to do a blood or other test, which will make it easier for the doctor to choose the best possible treatment that will save the patient from terrible complications.